There have been lots of debate and arguments over which one is better between medical school and Law School.

Many students opined that law schools are better than medical schools due to their favorable academic calendar and relatively higher acceptance rate.

Others believe medical schools are better because they provide a smooth path to achieving their dream career. Considering the topic’s importance in your quest to know about both schools, we have chosen to add our voice to the argument that won’t end anytime soon. 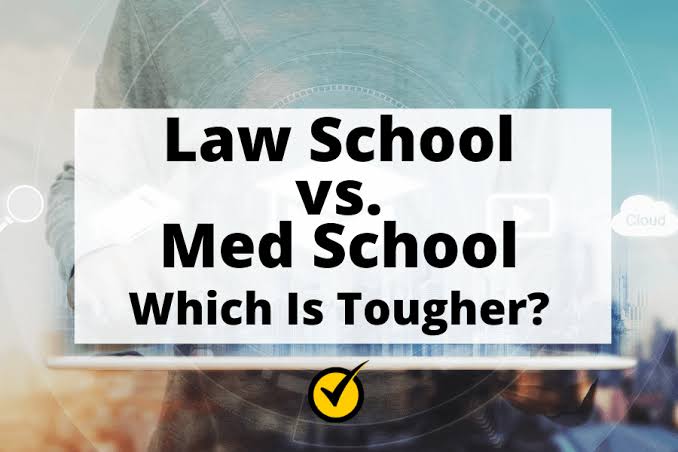 Though we can’t specifically say which one is better in all ramifications, we will consider different categories and see which one comes first in each of them.

Law Schools come first when it comes to acceptance rates. Applicants stand a better chance of being admitted into law schools than medical schools due to their higher acceptance rate.

Therefore, it is safe to admit that medical schools have an extremely competitive acceptance rate, compare to law schools’ lightly competitive admission.

Is it harder to get into law school or med school?

It’s hard to get into both schools because they all have a low acceptance rate compared to other schools in the country.

The fact that both schools require nothing less than a 3.5 GPA makes them harder than any undergraduate institution.

Comparing medical and law schools, getting into medical school appears harder than entering into law school.

To this effect, you must be mathematically sound to gain admission into medical school, unlike law school where you need little or no mathematical prowess to succeed.

Is law or medicine Tougher?

Medicine edges outlaw in this regard as it is very difficult to graduate as a doctor than a lawyer or barrister. Starting from the admission process, a medical school has hectic admission steps and tests.

Most universities have fewer spaces for students applying for medicine when compared to spaces available to law applicants.

In the same vein, you need an extremely higher grade and strong MCAT score to study medicine, while a good grade and LSAT score can give you the chance to study law at Yale and Harvard universities.

In terms of program length, medicine requires four years of intense reading and three years of practical training to become a qualified medical expert who deserves employment in any medical field.

On the contrary, you need just three years of dedicated reading and hard work to become a qualified lawyer. Hence, it won’t be out of place to say that medicine is tougher than law.

Is law or medicine more competitive?

Medical school and law school are competitive in terms of acceptance. However, medicine is slightly above law because fewer students ended up gaining admission into medical school.

Nonetheless, you’ve got to provide all the requirements, including a high GPA, to stand any chance in any of the two schools.

What percentage of students gets accepted into medical school?

According to the data by Association of American Medical College; the overall acceptance rate of all the medical schools in the United States is 43%.

It means 43 out of 100 applicants will be given admission throughout the country.

What percentage of students gets accepted into law school?

According to stats, 115 law schools in the United States had an overall acceptance rate of 46% in 2019. However, the rate has increased drastically since then as it currently remains at 60%, meaning 60 out of 100 applicants will be offered admission into any law school across all states of the federation.

However, an average law school boasts at least a 29% acceptance rate. It means 29 students will be admitted out of 100 high school graduates seeking admission into any law school.

Note that the stats above can change at any time as there could be changes in University’s admission policies.

Law school or med school which is more expensive?

Medical and law schools are highly expensive. You need close to $100K/year —including accommodation, food, and other expenses— to study at any of the Schools.

It’s easy to admit that a Medical school is costlier because medicine programs lasts for four years, while Law courses only runs for 3 years.

Nonetheless, you shouldn’t worry too much about the tuition fee because you could benefit from numerous scholarship programs available to students in the country.

Some scholarships cover 10% of the tuition fee, while some are 5%. Check the list of scholarship programs supported by your tertiary institution, go through the requirements, and apply for the suitable one.

Who gets paid more a lawyer or doctor?

Well, there are many things to consider before answering the question. This includes level, country’s salary policy, organization level, etc.

Notwithstanding, doctors are more paid than lawyers. It is said that an average medical doctor receives at least $208,000 per annum. On the other hand, an average lawyer gets $118,160 in the same time frame.

In the same vein, doctors are more respected than lawyers because they are seen as professionals who can save and terminate someone’s life without any trace.

People also respect doctors more than lawyers as a result of the price they paid throughout the six years of training.

However, that doesn’t mean you can’t earn more than a doctor if you are good at what you do. Train yourself, improve your skills, and obtain the highest available degree if you must be among the highest-paid lawyers in the profession.

We believe you can now decide which program to choose between medicine and law. Meanwhile, don’t feel intimidated by any of the points discussed in this post.

Instead, it should guide your final decision over which school to choose between the two.

Finally, we are readily available to provide helpful tips and advice on school-related issues. Paste your questions in the comments section below and we’ll respond as soon as possible.